Chuck Palahniuk released a sequel to Damned. It’s called Doomed. And he’s touring to support the launch of his book. Last month Palahniuk spoke in conjunction with the Commonwealth Club at The Castro Theatre with John Law, Carrie Galbraith, and Kevin Evans about the Cacophony Society. It was quite a production. You sat according to your ticket level. I had purchased a book in advance so that secured me a better seat than just a regular lecture ticket. This appearance was not related to his newest book at all. 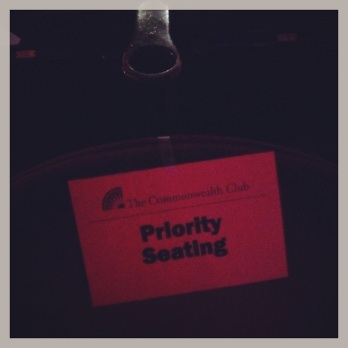 The Sisters of Perpetual Indulgence gave a blessing and led a sing-a-long. They distributed the song to the audience so we could all sing it together.

So there were three people interviewed on stage by a fourth person. About the Cacophony Society.  What it is, how it started, what they do, who is in it, where they are. And then there was a slideshow prepared by the founder of Burning Man.

Note Chuck Palahniuk laid down on his back using his jacket as a pillow to watch the slideshow.

The conversation was interesting and filled with funny anecdotes. The Cacophony Society deserves its own discussion. But I was extremely disappointed because this was not what I was expecting. Palahniuk wrote the foreword to the book, Tales of the San Francisco Cacophony Society. The book is gorgeous. Probably one of the better looking books I own. But I doubt I’ll read the whole of it. I’m just not that interested in the cacophony society. 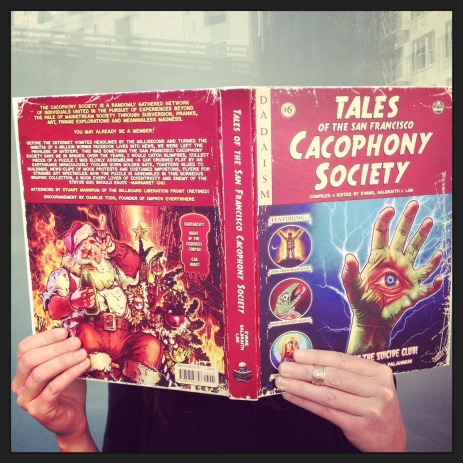 At this point you are probably wondering what the cacophony society is.  The back of the book describes it as, “a randomly gathered network of individuals united in the pursuit of experiences beyond the pale mainstream society through subversion, pranks, art, fringe explorations and meaningless madness.” A lot of the pranks they described are intelligent, some of them dangerous, a lot of them broke the law. And they have been appropriated by others. They started what became Santicon. The speakers intimated that they were not comfortable in mainstream society and that they considered themselves underground. The cacophony society’s roots are in the suicide club, which formed around 1975. It was a way of exploring the city. Over and over the speakers encouraged people to get out of their houses and into the world. Do something new. Do something with others. Don’t be afraid to look stupid. If everyone is doing the same stupid thing, you can’t look stupid, can you?

Extremely large knit Dogminicans that were parked outside the Castro Theater.

The panel was inspiring but not what I expected. There were three people named on the bill. One of them was a famous author. I went in expecting the time to be evenly distributed between the three people. Instead, the time was cut up between the Sisters of Perpetual Indulgence, a panel discussion, and a slideshow. All in all, Palahniuk probably spoke for 12-15 minutes. Palahniuk spoke about his experiences in the cacophony society and how the Fight Club‘s movie success was the ultimate cacophonic event. When Palahniuk tours to support his books he always reads an original piece he has written. There was no reading. Disappointing to say the least. Especially when his name was used to sell the tickets. And to sell books.

Someone was selling bootleg copies of Tales of the San Francisco Cacophony Society. He claimed they were identical. The dust jacket was not attached to his copies like the ones from the theater. I’m not sure if they were blank inside or not. It felt as though it was a cacophony event.

The Commonwealth Club has made the entire program available to watch here.