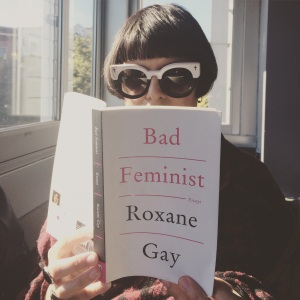 Roxane Gay‘s Bad Feminist demands to be read. A demure white cover with the words Bad Feminist in the traditional feminine color pink and in much smaller font, essays. Followed, in equal proportion to the title Bad Feminist, is her name. Roxane Gay is putting herself out there. She is declaring who she is and accepting the space between being a feminist and being a bad one.

Gay is an intellectual who doesn’t apologize for liking young adult fiction, she enjoys misogynistic rap songs. She enters scrabble tournaments. She watches and analyzes crap tv shows and books. Gay goes on the record to say she not only indulges in these things, she revels in them while celebrating them in print. She reveals a lot of who she is in these essays. And she’s the kind of person I wish I could be besties with. She writes, “I’ve struggled to make friends because I can be socially awkward, because I’m weird, because I live in my head. . . I should not be this way but I am. (Gay, 141). Don’t worry Roxane, I’ll be your friend: I’m just as socially awkward.

Like Gay, I’ve had to explore my relationship with the term feminist. I’ve made the statement, “as a feminist. . . ” to qualify my feelings about something, or sometimes to point out the irony of what I am about to say. I dislike that feminist has to have a definition. I hate that at the age of 17, I questioned what the term meant when I was in a sociology class and no one raised their hands when our teacher asked who was a feminist, including me. I elected not to because I thought I must not know what this word means if everyone else doesn’t raise their hands. I had thought, correctly, that it meant, equal rights for women. And yet, not one person in my class was a feminist except my teacher, and me, the girl who couldn’t define the word.

Why didn’t I know what the word meant? It certainly wasn’t from lack of strong women in life. Perhaps the problem lay in education. The women in my life were too busy taking care of themselves and their siblings to become familiar with the term. My mom constantly worried that I would give up my life for a dude. As I grew, I became aware of the choices I made. What I cared about was going to school, learning, reading, bettering myself. These are all things I did because of my mother, the unaware feminist.

My mom worked hard her whole life, she started work as a young teen picking fruit in fields. But my mom didn’t want the life she had. She wanted out. She borrowed money and attended a key-punching school, then moved to San Francisco. She was happy. Then married the wrong man. She divorced him. Later on, met my dad, a Vietnam veteran turned hippy. They got married, bought a house, and then she went back to school to become a preschool teacher.

What I learned from her is that when you make a mistake, admit it, and fix it. She got divorced at a time when not too many women were. She could have kept that life. But it wasn’t good enough and she realized that. Unwilling to settle, she changed it. Yes, language is important. And knowing what words mean is important. But sometimes, actions really are the only thing you can learn from. My mom doesn’t call herself a feminist. But she is a strong woman.

A linguistic aficionado, Gay dissects the careless language of sexual violence. She argues “That is not simply the careless language of sexual violence. It is the criminal language of sexual violence” laying blame on the shoddy journalists who cannot write objectively. (Gay, 136) Aware that she is making some bold statements, acknowledging that she sounds angry, she writes, “It’s hard to be told to lighten up because if you lighten up any more, you’re going to float the fuck away. The problem is not that one of these things is happening; it’s that they are all happening, concurrently and constantly. . . These are just songs. They are just jokes. It’s just a hug. They’re just breasts. Smile, you’re beautiful. Can’t a man pay you a compliment?” (Gay, 189). And her words, while not mine, feel like they’re mine. I know what she’s feeling so well. I’m frustrated by unintentional language, casual racism, sloppy writing because it all invades and infects how we see and interact with one another. Perception is just as much language as vision. And I’m tired of my tight lipped grin, the one I give to people when they say something that makes me uncomfortable, especially when it’s intended as a compliment. I just want to shout and instead, my face freezes into that false smile, and mentally step away from the person, before I physically do.

If Gay defines herself as a Bad Feminist, perhaps that’s what I am too. I’m not sure if I need the qualifier bad, but I do laugh at inappropriate jokes, I do enjoy music that encourages violence, and many of my favorite writers are dead alcoholic womanizing and sometimes abusive men. I highly recommend this book of essays because they are brilliant, make you think, and make you laugh.