Thomas Pynchon‘s Inherent Vice is about a pothead private investigator asked by his ex-girlfriend to look into the disappearance of her new (married) boyfriend, who is a wealthy land developer. Set in the sixties in Southern California, the hippy movement is strong, surfing and surf rock rule, mistrust is rampant, and everyone is corrupt. Everyone is looking to score but it’s not always drugs they are looking for.

This noir novel drives the reader into the mind of a pothead. Not necessarily the protagonist’s mind, because if I was inside Doc’s mind, I would have an easier time reading Inherent Vice. Pynchon introduces an unceasing barrage of characters, without any background on them: just a few sentences to explain how they’ve entered the story at that exact moment. It’s like we are Doc’s silent partner, waiting for him to verbalize something so that we can understand what is happening. Everything seems so hazy as you read: characters reappear, but there are so many you have to struggle to remember who they are: Corrupt cops, drug dealing cooks, white supremacists, boyfriends, a sitcom-obsessed lawyer, wives, drug transporting flight attendants. Everyone is high on something: drugs, power, wealth, sex.

Pynchon’s descriptions pull you into a drugged out haze: one where you end up rereading paragraphs because he subtly makes your mind wander as Doc’s mind wanders and connects unrelated things and notes everything he sees and hears. 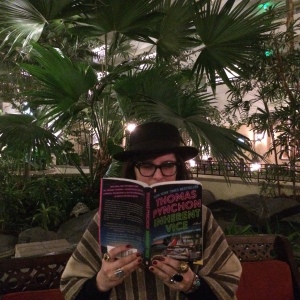