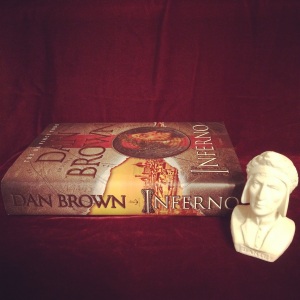 When I was younger, more naive, and more pompous, I steered clear of bestsellers. I assumed that they were for “the masses” and therefore, not me. The problem with that is a lot of our classic literature was created and read by the masses. It’s a bit childish to hold a book’s popularity against it. I remember seeing The DaVinci Code in hardback in bookstores. Then it was the paperback. Then, another special hardback, with illustrations. I wondered, how did this book get reprinted in hardback, for more money than the original hard cover? I read the description and thought, “ohhh, now I get it.” I purchased the more expensive illustrated edition and read.

While Dan Brown’s books aren’t what I consider literature, they are really fun, well written fiction. Most of the criticism I had read about Dan Brown accused him of rewriting stories. But the thing is, there are no new stories left. They’re already all out there: the only difference is in how they are told. The plotlines can vary, the characters can be strong or weak, the heros can be men, women, or transgender, the language can be unique and beautiful, or it can be filled with trite cliches.

Brown is adept at character development. He has one major character, a Harvard professor of symbology, who always ends up partnered with a woman. And thankfully, it’s a new woman every book, so he’s not stretching plot lines to force two characters together. Additionally, the women are always intelligent, strong, and capable. They do not need Robert Langdon: they tend to be pulled into his world to assist him. He knows how to build a scene, ones that make your heart race, ones that make you stay up late with eyes burning just to find out what happens next. 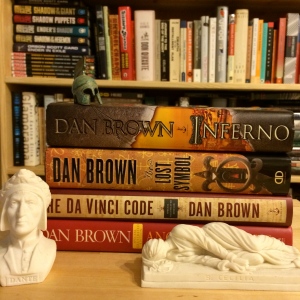 Perhaps my favorite of Brown’s abilities is that of casually working art, history, and symbols into his books. In fact, they aren’t just casually mentioned: more often than not, they are the driving forces of Brown’s novels. They are folded in so easily that they never slow down the story. Sometimes, even the most exciting books slow down as the author is developing the back story. And sometimes those paragraphs or pages are difficult to get through (I’ve heard this from numerous people about The Girl with the Dragon Tattoo). And yet, Brown’s books are so easy to read. It’s been said that only an expert can make something look so easy, and I’m reminded of that each time I read a Dan Brown book.

Each of his books takes place in other countries: England, France, Italy, and in Inferno, Turkey. His books describe parks, museums, cultural attractions, pavements, works of art, fountains, and sculptures. Each of these are gracefully described with a clear love of each item and place. These details are postcards sent to the reader from Brown: they allow us to see other cities and experience the art. He includes the weather, the sun, the shadows. Everything is seen so clearly from Brown’s perspective.

Dan Brown’s Inferno is about a scientist who believes the world is destroying itself and only he can stop the destruction by infecting a third of the population. The scientist has an obsession with Dante Alighieri’s The Inferno. I’d like to say I understood all the Dante references, but alas, I did not. I do know about Beatrice, the Dante museum in Florence, and the 9 circles of hell (more from a Nirvana poster I used to have in high school). Inferno has literary references, science, art, drones, and a plot that won’t stop.

Join the masses, read Dan Brown. You’ll stay up way too late and forget to do the dishes but it’s ok, you’re reading.