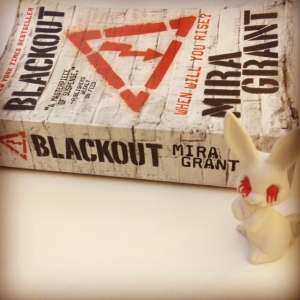 Blackout by Mira Grant is the third book in her trilogy about zombies and the dystopian future. The first two books, Feed and Deadline, explore a Presidential campaign and a government conspiracy.

The first book, Feed is narrated by blogger Georgia Mason, who runs a news website with her best friend and brother, Shaun. Science accidentally creates a virus that turns people into zombies: the Masons live in a world of zombies, where outbreaks can take over entire cities. Georgia Mason is a strong female character but three quarters through Feed, Georgia dies!  However, Georgia continues to exist, as her brother’s hallucinations. He speaks with her throughout Deadline.

Blackout shows us Shaun as more disturbed and more insane. Becks Atherton, another blogger takes more of a leading role as Shaun grows more insane. Up until of recent, the virus could only be carried by humans and extremely large animals: insects were too small but a new strain was released within a mosquito population during a typhoon which increases the virus’ scope and hysteria. Blackout also

Backgrounds and settings constantly change since the characters are journalists and enemies of the state (after Feed). The books rely heavily on character development and relationships. Shaun and his team work with scientists, people living off the grid, and outlaws. New characters are introduced in Blackout: more conspiracy, more science, more paranoia.

Grant creates characters that we care for and mourn when they die. She isn’t afraid to kill them off: it would be ludicrous if everyone survives a trilogy about zombies. She expertly creates a world in which no one is trusted and everyone is suspicious of everyone else.

Once again, there is so much more to these books but I don’t know how to write about them without giving away major plot lines. When I finished reading Deadline, I had to reread the same paragraph a few times as I thought I misread it. It was such a huge twist that leads into Blackout. So if you’re into strong female characters that don’t obsess over their looks or men, pick up her books. If you’re into unbelievable plot twists, zombies, conspiracy theories, the world of blogging, science-fiction, and action, these books are for you. 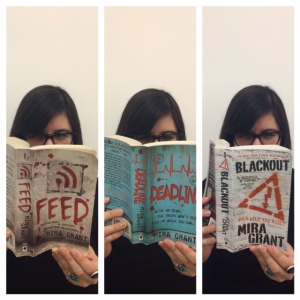