I saw Chuck Palahniuk speak again. Presented by Booksmith, Chuck was speaking at the DNA nightclub to promote his latest book, Beautiful You. I was going with my friend Gib and as we approached the club, his boss called and asked if he wanted to bartend the event. So we skipped the line. The line that was around the block. Once inside, I found myself in another line, which I thought was to pick up the autographed book I had pre-purchased. But as the line moved, I realized I was in a totally different line: to meet Chuck Palahniuk.

There was one girl ahead of me and some guy cut the line and then I started to panic. People were crowding around, not keeping to the line anymore. I was incredibly anxious that I would lose my turn as the sea of more charismatic people surrounded him. And so anything intelligent that I had hoped to say (and let’s face it, nothing to say as I turned into a super fan) went out the window and all I could do was ask to have my picture taken with him. I knew that I would regret it if I couldn’t just force myself to ask. So I just quickly asked, and he kindly agreed. And then there was a problem with my phone in which the red filter was turned on. But it was focused and there was a line and so I gratefully walked away. I couldn’t even thank the guy who took the picture (he worked with Chuck) because I was so gleeful. I felt drunk after meeting him and so very grateful that I had the opportunity to meet him (even if I couldn’t say anything). I was just proud of myself for not letting myself get shoved to the side by louder more charming fans. 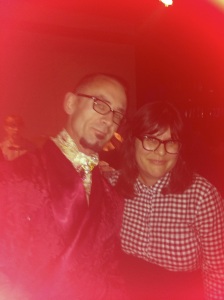 I next moved to pick up the autographed book and then was given a beach ball and two glow sticks. I was told to write my name on the ball and all would be revealed later. Gib helped me break the glow sticks and blow up the beach ball. Three times over the course of the night, lights were turned off, music played, and beach balls were tossed in the air. Two balls were chosen each time and the winners received special edition copies of Fight Club.

This time Chuck brought with him an opening act. Another writer that he likes, and this other author read two short stories; one of them was about a man who goes to Vegas and comes back with herpes. What’s great about this is that Chuck is supporting another writer. I’ve never seen another writer bring an opening writer.

Chuck is changing the culture of author readings. He is making reading dynamic. He’s making it obscene. And he’s got an entirely new cult of readers. The kind that read subversive fiction. The kind that read for fun. His books are never assigned in school. I’m not sure what teacher would be able assign them. He encourages fanaticism in a controlled setting: people line up to meet him, he hugs every fan tightly and closely. He exudes an openness that will not judge; confessions are made and secrets revealed.

He brings boxes of items with him to every reading. Blow up items that audience members have to blow up to win something. Stuffed tigers for asking questions. This last time he had prosthetic arms with his signature on them. He threw out dozens of those. (Unfortunately, I was on the balcony and could not get one). Because it was close to Halloween, he threw bags of candy at the audience. His audience wants these items and they are happily pelted with items (except the candy corn—no one wanted the candy corn). People are screaming, begging for his attention, his love, and his silly giveaways.

Most author readings are solemn with the author and a single moderator. Chuck doesn’t use a moderator. And they never include giveaways. People don’t shout questions; they wait their turn for the microphone. Traditional readings are very orderly whereas Chuck’s readings always feel chaotic. A rumbling is always underneath the surface; everyone is ready to wreak havoc if their silent leader encouraged it. But there’s the beauty. He’s a quiet writer nerd. We don’t have to do anything; he’ll never ask us to do anything but read and listen.

After his reading he answered questions from the audience. After being questioned about his writing style, he said that he writes with verbs and removes gender. Someone else asked if he will write non-fiction again. And he said that he studied journalism; that everything he writes now is nonfiction because it is based on stories people tell him. This is something he emphasizes at each reading, that he collects stories.

He said that at the latest comicon he was at:

A girl pulled him aside and told him a story she had never told anyone else. Ever. When she was in highschool her family had a dog that pooped everywhere and this upset her parents. One day while her parents were out she had sex with her boyfriend on her parents’ bed. They came home early and she got nervous and pooped a little. Her boyfriend and she didn’t have time to get dressed so they hid in the parents’ closet. Upon seeing said poop on their bed, the parents slammed the door and drove off. When they came home they revealed that they had the dog put to sleep. And this girl never told anyone else besides Chuck this story.

The thing about Chuck’s fans is that they are mostly young and with the exception of that line cutter, extremely polite. Yes, they like raucous jokes and stories about deviant sexcapades, but they all respect Chuck and one another. Mostly the same questions are asked by his fans at each reading. But they are all thoughtful and respectful of Chuck. All of them respect him as an artist and a writer.

Chuck Palahniuk writes about people living on the fringes with empathy. He creates these crazy plots and stories and you end up caring about the characters. Why? Because deep down, I think he cares. And it’s evident when you see him speak and read. And while I was only standing next to him for a minute, he exuded an aura of accepting kindness.