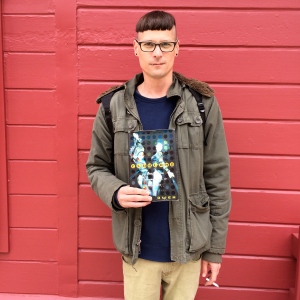 Frank Owen‘s Clubland: The Fabulous Rise and Murderous Fall of Club Culture delves into drug dealer Angel’s murder by club kids Michael Alig and Robert “Freeze” Riggs. It objectively states the facts and points to police reports and witness statements. Owen was a journalist for The Village Voice and wrote an article on Special K, which was at the time the new drug in the club scene. As a result of his research he became friendly with some of the dealers, promoters, club owners, DJs, and club kids. Writing with authority he allows the outsider a glimpse into the club scene and what can happen behind the scenes. But the book leaves a lot to be desired.

The thing about Michael Alig, Angel, and Peter Gatien is that their story is deep club lore. They were second generation Factory kids without Warhol or the Factory. They created an underground culture that was so outrageous it became pop culture. They did the talk show circuit. They proposed that beauty could be ugly and created a community for one another. This hedonistic lifestyle could only last so long. People grow up. Or they change. Or worse, they become drug addicts. And maybe that one time, murderers.

Their story was told through newspapers, mostly The Village Voice. I was living in NYC at the time but in a totally different club scene. One that was filled with sixties garage rock, soul, and Britpop music. I remember seeing those other club kids on the street. I loved the way they looked. The colored hair, the facial piercings, the platform shoes. There was a place on St. Marks Place that would make any pair of shoes you liked into platforms, either full color or multi-color platforms. It wasn’t until I moved in with my old roommate years ago (in San Francisco) that I found out about Alig and Angel. Randy bought a documentary of the club kids. Rumor had it one of our friends was Alig’s cousin. Seems totally suspect now but at the time, I was gullible enough to believe it.

Michael Alig was a young smart queer boy who moved to New York City to become a club kid. He wanted to be accepted by others. He became a club promoter for Peter Gatien, owner of the Limelight and the Palladium. Alig acted as Warhol did, creating his own Superstars. One of them was Angel, who became a drug dealer. Everyone was friendly. Alig slowly escalated from occasional drug user to drug addict. Gatien wouldn’t pay Alig in cash because he knew all the money would go to drugs. Alig continued to do drugs but on credit. Angel went to collect while Alig was with two other friends and high. They got into a fight and Angel died. The published story is that it was an accident. But then Alig and Riggs woke up. They didn’t want to call the police. They hid Angel’s body in their bathtub. For a week. A knife was bought and they sawed up Angel’s body and dumped his remains in the Hudson River.

Clubland explores the drug sting and money laundering that was being conducted against Peter Gatien. The details are more than I care about and at times I suspected they were included to pad the length of this book. Perhaps someone else would be interested in the drug dealers and the want to be mafia men that move to Florida. But it was a stretch to be included in this book.

Clubland is a good companion piece if one wants to know the facts. But sadly, it reads like a journalist wrote it rather than a club kid. There’s no humor, no depth. I realize the story is disturbing, a murder happens, but there is so much more. Having been in a different club scene, I can attest to the camaraderie, acceptance, and family that exists within these circles. Club kid James St. James’ Disco Bloodbath: A Fabulous But True Tale of Murder in Clubland is well written. It’s funny. There is a style and flow and you are transported into the club scene. Owen uses the first person narrative, yet you never feel a part of the scene; instead you are always on the outskirts, watching. This disconnect results from his anger with Alig and the lack of legal interesest in the murder of a young person of color (who happened to be a drug dealer). His hesitancy to align himself with the club kids is understandable but his inability to write other than a long newspaper article is a bit disheartening, considering the subject. Owen misses the opportunity to explain why Alig and club life was so desirable and relevant for these misfits and outsiders. We never read about what brought these kids together and how they enjoyed each other’s company and supported one another.

He loses the capacity to understand his subjects and the friendships that arise from dancing every night, going to late night diners, bagels from bodegas, falling asleep in a cab with friends, drinking sprite mixed with cheap booze while walking down the street, rushing to the after hours party before they close the doors, riding the subway, leaving a club after the sun has come up, crashing on someone’s couch or floor, borrowing someone’s clothes because you haven’t been home in three days, talking for hours to someone you swear is your kindred soul but you never see again, and that first time you hang out with your club friends in daylight.

I shouldn’t judge the book based on my experiences, but I just can’t help it.