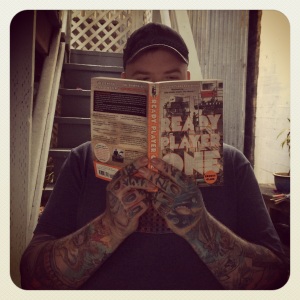 Ready Player One by Ernest Cline is addicting. It is the book that you flake on friends for. It is the book you stay up late until your eyes are burning and you fall asleep sitting up with your cat on your lap. It is the book you ignore phone calls for. And it is certainly the book you sink into and forget all else. My friends Tzuen and Gib insisted I read it. They had both bought it the same day and had already finished reading it by the time I saw them (two days later). They sat on the couch next to each other reading their separate copies of the book.

In the future everyone spends their time in an alternate online reality, called the OASIS. People spend more awake time in the OASIS then they do in reality. People work and attend school in the OASIS. People spend money for non-existent items that allow their avatars to do more things (clothing, space ships, weapons, magic items) but only in virtual world. The creator of the OASIS was a huge video game nerd who grew up in the eighties and was forever nostalgic for eighties culture. He created games and worlds in homage to the decade; his final will and testament, which was spliced with scenes from Heathers and John Hughes’ movies, stated that he had placed puzzles within the OASIS and whoever solves them will inherit his fortune and control the OASIS. A private company realizes the monetary gains to be had by whoever controls the OASIS so they hire people to explore the virtual reality full time. They have a seemingly endless budget and people sign contracts that they will hand over the control of the OASIS to the company.

There are so many relevant plot lines, threads, and characters to this book. The book is especially resonant for anyone that is not part of the wealthy elite. Wade was born in the stacks—”to maximize the ground space. . . . and trailer parks across the country had quickly evolved into ‘stacks’ like this one—strange hybrids of shantytowns, squatter settlements, and refugees camps. (21) After his teen parents die, his aunt takes him in for the extra food and lodging doled out by the government. She in turn steals his food, his property, and kicks him out of the trailer. Wade is overweight because of his “bankrupt diet of government-subsidized sugar-and-starch-laden food” and being an OASIS addict who never exercises. (30) Being poor is a crime, and if you go into debt you are thrown into debtor’s prison. For Wade, without great grades for a scholarship, he has no chance of going to college, therefore his job opportunities are low. So he spends all of his time searching for the hidden clues to win the fortune.

This book appears to be a self-indulgent fun story filled with pop culture references. And then bam! without any foreshadowing, a huge dialogue about race. And then, another dialogue about being queer. And this is not a case of Beverly Hills 90201 preaching about white people understanding racism or straight people having one queer friend. This book has serious plot lines that stick with you and make you think about poverty, power, resources, global energy crisis, gender, and beauty. I will not spoil the plot for you; it would be cruel to take away your pleasure at discovering all these things. But I do promise you that this book will keep you thinking long after you finish it. And more than likely, you’ll be planning on rereading it before you finish it.

Check out Ernest Cline’s website; it is definitely the most witty and thoughtfully designed author website I have ever visited. And, he offers something no other author does, to sign your copy of his book if you send it to with him a self-addressed stamped envelope. I’m going to send my copy in for an autograph.