Books no longer mean the same thing they used to. In the past, books were read and reread, shared with trusted friends, and handed down to the next generation. In city life, with apartments being so small, a lot of friends have had to downsize their collections. I have tried to weed out the books I will never read: the ones I’ve owned for over a decade, the ones that remind me of former friends. One’s bookcase reflects a large part of who one is and chronicles who one was and who one would like to be. For example, all my Anne Rice and Poppy Z. Brite books indicate that I used to be a goth kid. And then you see who I’d like to be: the person who reads Vladimir Nabokov‘s translation of Pushkin or a study on medieval warfare. I plan on reading them one day. But there are also books I’ll never read. I keep them because of the sentimental value, the moments they represent, or their sheer beauty. 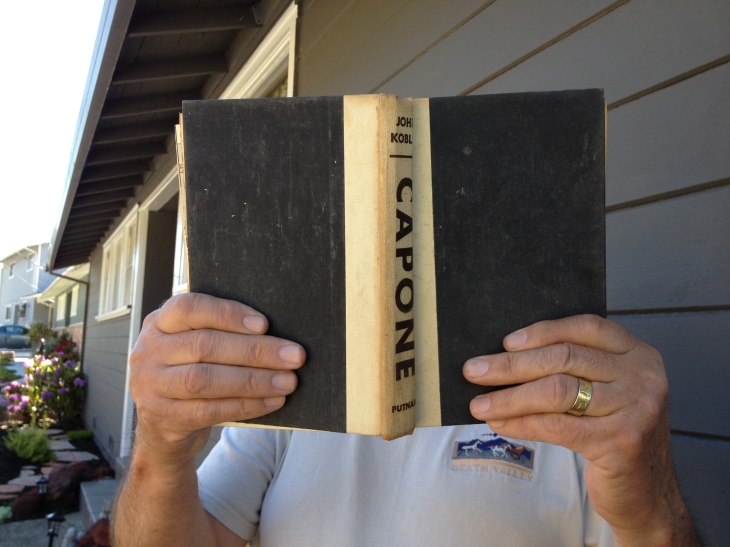 This biography of Al Capone was written in 1971 by John Kobler. It’s missing its dust jacket, stained, and the pages are falling out. When my grandfather stayed with my parents, he read and reread this book. My mom described him  hunched over it with his reading glasses. My dad always piped in, “that wasn’t his book, it’s mine!” And because my father is so great, he gave me this old book that no one else would want. The one that connects me to my dead grandfather I never met.

This is my Aunt Juanita’s shorthand dictionary. She taught herself shorthand to work as a secretary. She was 19. I found this in the school bus that used to be on my grandmother’s ranch. I spent hours opening old boxes and looking for treasures. I ran to my grandmother and asked for this. She waved me away, “Oh you want that? Take it!”

Inside were some of my Aunt Juanita’s practice sheets.

We used to go to the flea market as a family every weekend. One time, my mom was away so it was just Dad and me. My dad found a miner’s candlestick he wanted and had to borrow money from me. (This was before portable ATMs, so you had to leave the flea market to get more money.) I later found this movie tie-in of Gone With the Wind. It cost $10 but we got it for $7. We spent the last of our cash on this book, paying $2 in change we scrounged up from our pockets. After that, we went to breakfast. This is one of my favorite memories of my dad: we were giddy with the items we purchased, and having to cough up those last $2 in quarters united us in solidarity. It’s started to fall apart: I took it to a book binder to fix it but they were going to charge me $60. I doubt I’ll ever read it, but the book is so beautiful and unique.

In Italy I found this copy of Henry Miller‘s Tropic of Cancer, printed in French. It was misty and all these paperbacks were poking out of green boxes. I feared the book was lost and mispriced but when I went to pay for it with shaky hands, the cashier didn’t care. The pages feel velvety. It’s falling apart and you can see how the sheets were grouped into small booklets and sewn together.

While at Fordham University I went to see my favorite professor in his office. His name was Professor Sicker but they called him C+ Sicker because he was such a tough grader. I was reading while waiting my turn to talk with him. He asked what I was reading and I told  him, “Tropic of Cancer, a friend recommended it.” He asked if I’d read Lolita. I said “no, not yet.” He asked if I had a copy of Lolita. I shook my head no. He looked at his bookshelves and pulled out an old copy and tossed it to me. “Here you go.” This is one of my most treasured books. The cover fell off so I had my dad make a frame for it. I’ve since bought a newer copy because I didn’t want to destroy this one any further. But this one has some of Professor Sicker handwritten notes in it, making it invaluable. 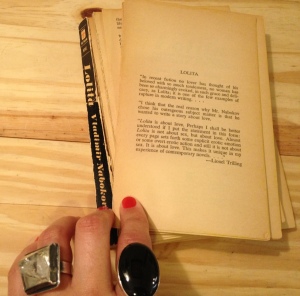 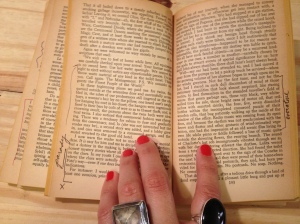 Years ago, I went to meet Jason at a Haight Street bar. They had a shelf of books you could take. I took this book by John Fowles because I drunkenly confused him with John Knowles. It was a long night and it devolved into a heated argument with Jason’s roommate about who wrote The Rear Window (Cornell Woolrich) or some other noir novel. As we were arguing, Jason started drawing on the book. At the end of the yelling, I had a newly designed book cover. 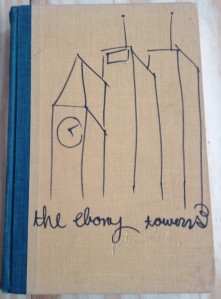 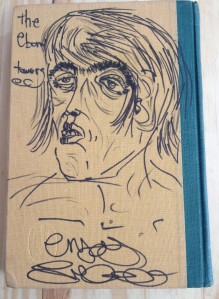 My friend Ronnie gave me this book for my birthday. I keep meaning to read it as I haven’t read much pulp fiction. Strange Sisters by Fletcher Flora, originally 35 cents, copyright 1954, is complete and unabridged! The cover tells us: “this love was wrong but she could not resist it.” The back cover expands: “No other way was normal—to her.  Strange Sisters is the story of an alien world. Never before has it been made so intensely real for adult readers.” 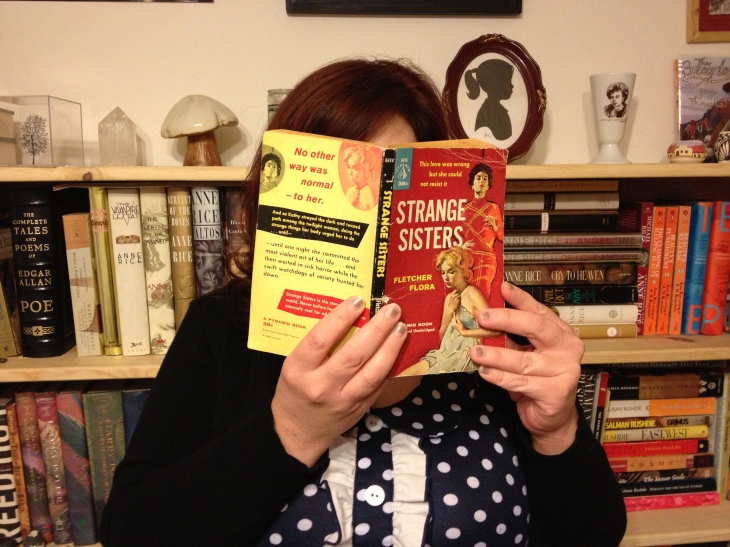 At a party on Staten Island, amidst all the mod kids, a friend pulled my attention to this book on her roommate’s shelf. I freaked out as I had never seen anything like it before. It’s a promo book for Pulp‘s album, His n’ Hers. The owner of said book rolled her eyes and said, “oh, my ex-boyfriend gave me that. You can have it.” I hurriedly hid it in my suitcase like a little squirrel hiding an acorn. I couldn’t wait to read it the next day. 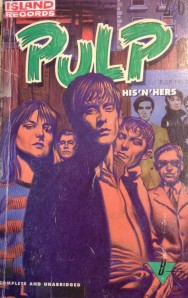 I really don’t like to lend out books because people never respect them the way I do. They come back with folded pages, dirty dust jackets, broken spines . . .  The problem with having so many books is that people think I’m running a library with books for check out at anytime. I loaned Valley of the Dolls to a friend and I didn’t get it back for two years. When it was finally returned, it was a nasty mess. I’m ashamed to say I got teary-eyed. My dear friend Heather traded me her clean copy for my destroyed copy. It’s so wonderful to have friends that understand and accept your strange quirks. 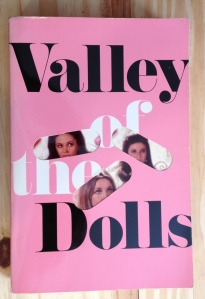 This The Lord of the Rings hardcover is the most expensive book I’ve ever bought. It’s leather bound with gold gilded pages and stored in a leather bound slip cover. It even comes with maps of Middle Earth. I don’t know if I’ll ever read this version because I have it in paperback. But I had to own this copy because they don’t make books like this anymore. 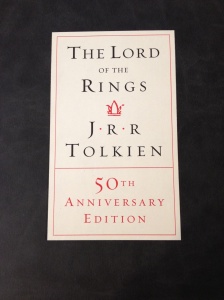 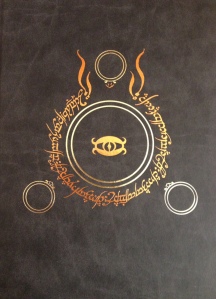 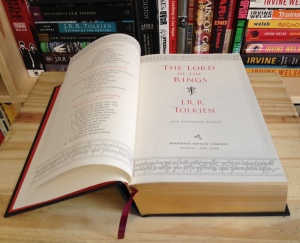