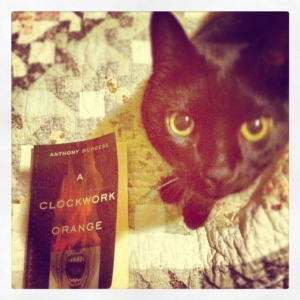 Anthony Burgess‘ A Clockwork Orange is a smart book that suffers from the film’s reputation. I just read it for the first time;  I should have read it years ago but the identity of the film and its advertisements deterred me. Every headshop on Haight Street and in the Village sells postcards, shirts, and posters with the movie’s actor, Malcolm McDowell. The movie’s tagline is “Being the adventures of a young man whose principal interests are rape, ultra-violence, and Beethoven”. Hmm, I’m not interested in that. At some point I picked up the book, read the description, and bought it. This is one of those cases where a reader buys a book, puts it on her shelf, and doesn’t read it for six years.

I have been attempting to read all the books I’ve been carrying around for the last three apartments over the last ten years. And so I picked up A Clockwork Orange because it bothered me; three different bookshelves. Countless people asking me is it true to the movie? And while I still don’t have an answer to that, I can say how much I enjoyed this book. It takes place in a future dystopian England that is overrun with gangs of teenagers. Young Alex, aka “Your Humble Narrator,” is the leader of a “droog” (slang for gang) who gets arrested and is sentenced to prison for fourteen years. He kills a cellmate so he is subjected to Reclamation Treatment in which he will be cured of violence and be free (he has been in prison for two years). After a month of treatment, Young Alex is released into society and encounters people from his past and he is incapable of harming them even though they anger him.

While the idea of a government imposing regulations on a person’s free will is not a new subject, the style is what sets it apart. The chapters are concise; actions have repercussions and characters have resolutions. Yes, it is violent but Burgess writes succinctly and his character describes rape as “in-out in-out”. Burgess’ characters do beat people up, rape, and murder them, but his descriptions are matter-of-fact. The beauty lies not in the actions, nor in the descriptions, but in the language. His slang creates another layer to his story, requiring a careful reader who will intuit what a word means from the actions surrounding its use. A Clockwork Orange is not just about a boy who likes rape, violence, and Beethoven; it’s also about how society deals with him and how he reacts.

The American version initially did not have the last chapter and so the movie was based on the American version. Anthony Burgess wrote an introduction explaining the reasoning behind the last chapter being left out and goes into detail about the ending. Although I knew quite a bit about what happened in the book and movie before reading the book, I did not know how either ended. I recommend reading both Burgess’ and his publisher’s note after you complete the book.